You either love it or hate it — the reception of Amazon’s new “Rings of Power” fantasy TV series based on J. R. R. Tolkien’s works has been loud and divisive. Amazon has been “review bombed” into disabling reviews for the show, and even Elon Musk couldn’t help but weigh in. Either way, it’s clear all this passion comes from a love for Tolkien’s work.

Whether you identify with Aragorn or Frodo, Galadriel or Samwise, you know your “Lord of the Rings” lore. Although there will never be a replacement for Middle-earth, we decided to find out where each LOTR character came from — as if they all happened to be from the United States. But one does not simply match characters and states haphazardly. Using Google Trends to find the state that proportionally searches for each character the most, we set out to find out if Gandalf is an Iowan or Virginian; Frodo, a Midwesterner or a Southerner.

Our examination revealed that Utah is the One State to Rule Them All. Other Rings of Power went to Washington, California and Oregon. Over half of the “Lord of the Rings” characters initially ranked #1 in these four states. Luckily, we used a multi-round ranking system, so we did find a character from every state!

Did you grow up close to Boromir’s hometown? Did you vacation where Gimli resides? Check out our table and map to find out! 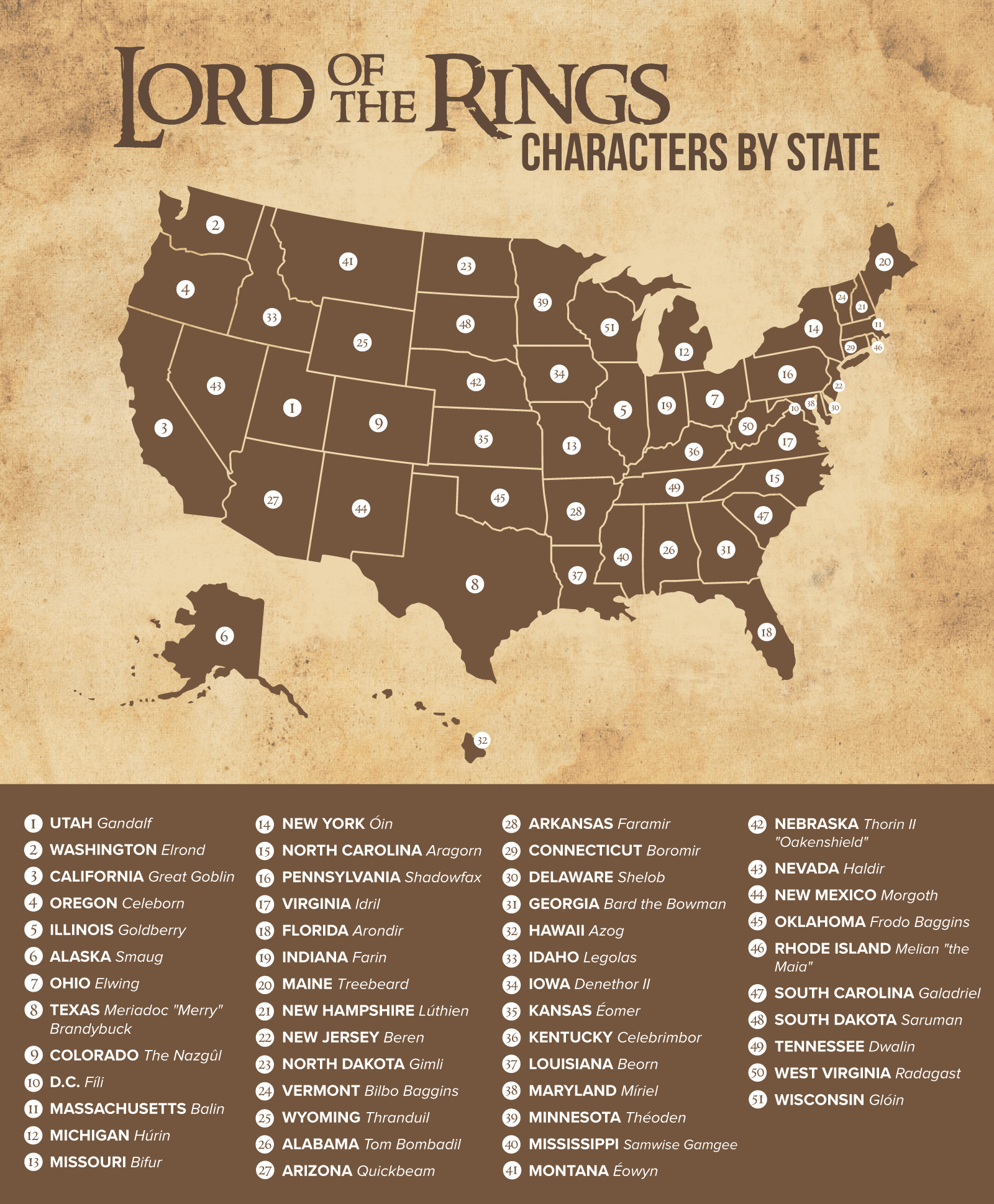 We created this article’s visualizations and analysis from a list of 91 characters from the J. R. R. Tolkien Universe. We used Cliffsnotes, Giant Bomb, The LOTR Wiki, IMBD and Wikipedia to assemble this list. We used Google Trends to compare search interest for each character by subregion for the whole U.S. between August 2017 to August 2022.

We used a multi-round plurality ranking system that assigned each “Lord of the Rings” character to the state with the highest proportion of Google searches. Many characters were most popular in the same state — Utah had 26 characters in the first round. In these instances, we matched the state with the character holding the most popularity there. After fitting a character with a state, we removed the state from the ranking system. We then continued allocating characters to states that came in second, third, fourth through seventh place. This system allowed us to award characters to every state while adhering to mathematical modality.

Unfortunately, due to our ranking method, three well-known characters did not make the cut: Gollum, Sauron and Peregrin “Pippin” Took.

Google Trends calculates popularity by region and interest over time using a scale of 0 to 100. A score of 100 is the state a character was Google searched the most, as a proportion of total searches in the U.S. A state wins a character because it has a higher proportion of searches for that character, not an absolute higher search volume. Google Trends bases its data on a random sample of searches representative of all Google searches. It does not use every search made during a specified query timeframe — providing the whole data set would be too large to process. Therefore, it is possible to obtain varying results for the same query.

You can download CSV spreadsheets containing the final rankings (including each round) and character source information here. If you are interested in the entire raw Google Dataset, please get in touch with us at [email protected] Please feel free to use or share this data with whoever may find this helpful — we ask that your purposes are noncommercial and that you link back to this page so its contributors can receive proper credit for their work.

The Most Popular Christmas Movie by State

The Most Popular Halloween Movie by State

Love It Or Hate It

The Wackiest Pumpkin Spice Goodies of 2022

The 20 Best Yoga Retreats in California, Based on Google Ratings

Everything You Need to Host The Perfect Oscars Party

How to Throw the Ultimate Galentine’s Day Party (2022 Guide)

Everything You Need for a Jungle Themed Baby Shower

Sweet as can be

Our Favorite Huluween Movies For a Spooky Date Night In